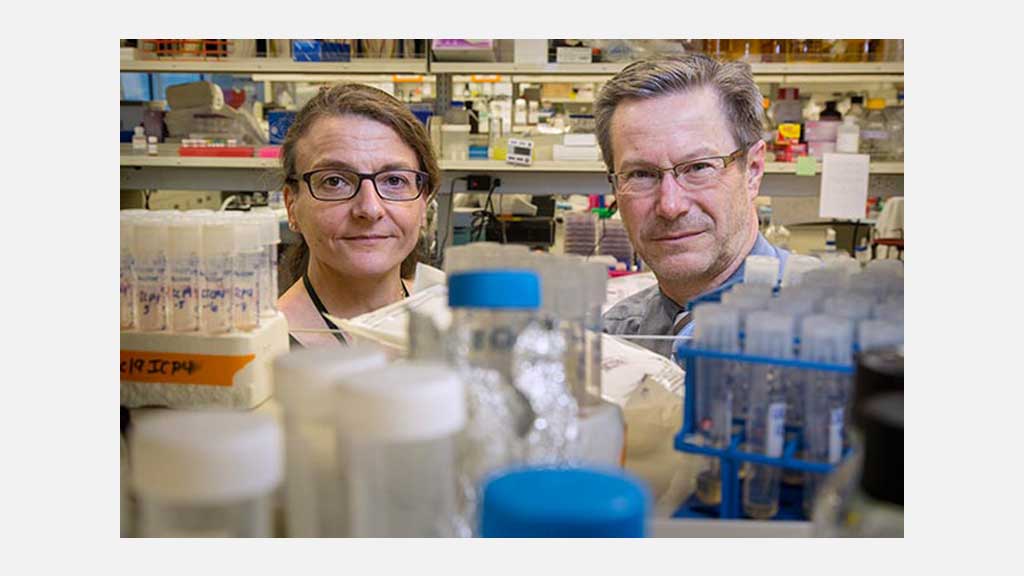 We received an email from Mary Engel a couple of weeks ago, asking if there was any interest in a cure for herpes for her upcoming article for the Fred Hutch Cancer Research Center. Naturally, we knew the answer was an easy, “Yes!'”.  Here is her article that has some really great information.  We reprinted it with permission.   At the bottom of the article is a link to Fred Hutch’s Facebook page so make sure to throw some likes their way. It sounds like they are doing some great work.  The original article can be found here.

Scientists at Fred Hutchinson Cancer Research Center have used a gene-editing technique to attack the DNA of the herpes simplex virus in infected mice, a key step on the road to defeating an often-stigmatized virus that infects one in six people in the United States alone and for which there is no cure.

The study, published today in the journal JCI Insight, “lays out the pathway toward a potential cure for human herpesvirus infections,” said Dr. Keith Jerome, a Fred Hutch and University of Washington virologist and the paper’s senior author.

Researchers in Jerome’s lab deployed DNA-cutting enzymes called targeted endonucleases to damage the herpesvirus genome, inducing mutations that destroy the virus’ ability to replicate. The study is the first in a living organism — rather than a lab dish — to show that gene-editing tools can be delivered to the herpes simplex virus in its latent state or to a latent viral infection of any kind. Doing so is key to curing herpes because a latent infection can reactivate and seed new outbreaks.

“We can take these targeted endonucleases, we can introduce them into a mouse that has a latent herpes infection, we can get them to where the virus lies dormant and we can successfully attack that virus in its dormant state,” Jerome said. “The process can work.”

The plan going forward is to “optimize every step of the process,” including using a newer generation of gene-editing tools such as CRISPR (more on that below), to attack the virus more effectively and boost mutation rates enough for a true cure. Jerome said it would take “several years of work” before researchers could think about testing the approach in human trials.

“But we’re certainly thinking about that,” he said. “That is the goal.”

The physical — and psychological — toll of herpes

There are two types of herpes simplex virus. The most widespread is herpes simplex virus 1, or HSV-1, which is usually transmitted through mouth-to-mouth contact. During an active infection, HSV-1 can cause so-called cold sores around the lips. Globally, it infects more than 3.7 billion people under the age of 50, or 67 percent of the world’s population, according to the World Health Organization.

With genital infections, the virus can be passed to newborns, a “devastating complication” that can cause serious illness or death if not treated early, Jerome said. In people with suppressed immune systems, such as those undergoing chemotherapy or other cancer treatments, sores can be severe. Genital lesions also can increase the risk of transmitting or getting HIV.

Then there’s the psychological toll. The U.S. Centers for Disease Control and Prevention states that 776,000 Americans are newly infected with genital herpes each year. Even when symptoms are nonexistent, mild or suppressed by medication, infected people can still spread the disease to their sexual partners, making a genital herpes diagnosis a source of embarrassment, shame or stress that can interfere with relationships.

“I felt like someone had just shot me in the chest every single day for those first six months,” wrote Ella Dawson, a self-described feminist millennial sex writer who was diagnosed with genital HSV-1 at age 21 and has since written openly about it in an effort to eradicate the stigma.

Numerous online support groups provide a safe place for the newly diagnosed, who often prefer to be identified only by their screen names, to talk about such things as when to have “The Talk” with a potential romantic partner.

“While many people associate herpes with outbreaks, they don’t realize the emotional pain it causes,” said “Dex,” who created and runs an online dating site for people with herpes. “The stigma of herpes is often worse than the physical effects. It’s not like you can easily tell your friends and family of your new herpes diagnosis. In our world, it is known as ‘The Talk.’ Often, the fear of rejection and the anxiety can keep some from attempting to date at all.”

A cure, Dex said in an email, “would mean so much to so many.”

HSV infections occur at mucosal surfaces — the mouth, the genitals. The virus is then picked up by sensory nerve endings on those surfaces and travels along axons to neuronal cell bodies, where it persists in a dormant state. But unlike some other lifelong infections that have latent stages — HIV, for example — dormant herpes simplex viruses rest in just two places in the body: a nerve cluster called the trigeminal ganglion in the skull for HSV-1 and, for genital herpes, the dorsal root ganglia adjacent to the spinal cord.

Having these virus dormitories confined to such specific sites is a huge advantage for researchers seeking to cure herpes, as is the relatively small number of neurons infected. By comparison, said Jerome, latent HIV is found in T cells, which are everywhere in the body, and researchers still don’t know the full extent of the latent HIV reservoir. 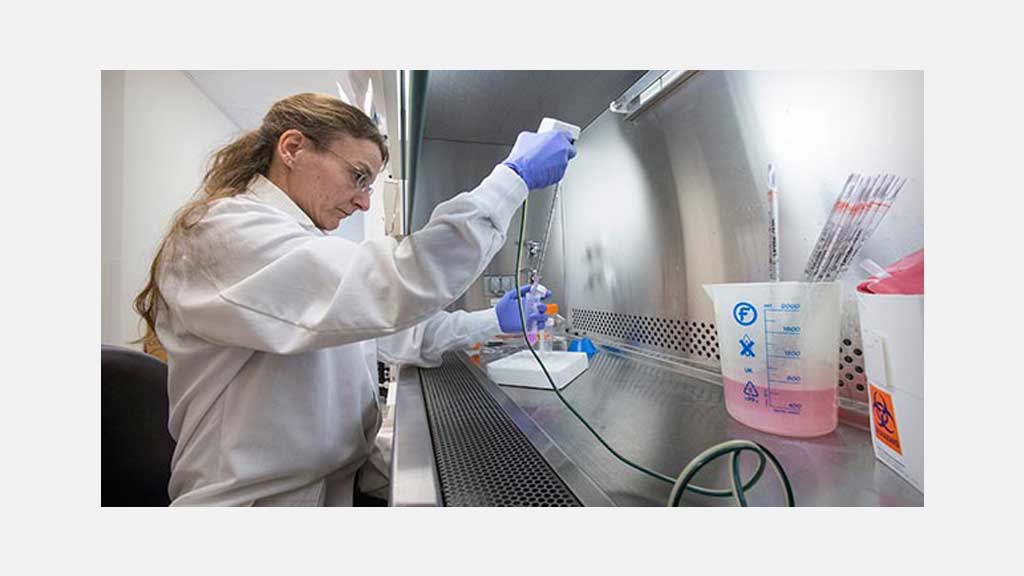 Aubert, a senior staff scientist in the Jerome Lab, is the first author on the JCI Insight paper. Photo by Robert Hood / Fred Hutch News Service

Dr. Martine Aubert, a senior staff scientist in Jerome’s laboratory and the first author of the JCI Insight paper, used an adeno-associated virus — which does not cause disease — to deliver the genetic instructions for making the endonuclease. She injected the instruction-carrying virus into the whisker pads of the mice, where it entered the nerves through a path similar to the one used by the herpesvirus, traveling through the axons to the nerve bodies where latent herpes resides.

Measurable disruption of HSV occurred in a majority of the mice, but the amount of virus with genetic damage was low, 2 to 4 percent. The goal now is to get more enzymes into the ganglia where they can act.

The gene-editing platform used in the study is an older type known as a meganuclease. But recently, a new kid on the block called CRISPR has been making headlines for its specificity and ease of use. In 2015, Science magazine named it the breakthrough of the year.

“With the [DNA-cutting] enzymes that we used, we are a little below the threshold that would lead to a therapeutic impact,” Aubert said. “Using a more effective gene-editing tool is going to bring us within the range that we could have a significant impact on the disease itself.”

Even partial results may help ease recurrent infections. Earlier studies have shown that the frequency and severity of lesions is related to how much virus is present in the ganglia. Eliminating just half of the latent infection could help ease recurrences from one every month to one or two a year.

“Obviously, the goal would be that we make this so good we get rid of 99.9 percent of the virus or every last one, and you’d have a complete cure,” Jerome said. “But there’s a possibility of intermediate success along the way.”

‘Why would anybody want to be cured?’

Fred Hutch and UW have long been a hub of herpes research, largely thanks to the presence of Dr. Larry Corey, who, as Jerome put it, “really wrote the book on our understanding of herpes simplex infections. Lots of us trained with him over the years.”

Early in his career, Corey worked with biochemist Trudy Elion to show that acyclovir, a then-new type of drug invented by Elion, could control and suppress a viral infection. Today, acyclovir and its successors have reduced mortality rates for babies born with herpes from 80 to 10 percent. Corey — who went on to found and head the international Fred Hutch-based HIV Vaccine Trials Network — also studied the daily use of the antiretroviral to prevent herpes transmission.

But while acyclovir can suppress an active infection, it can’t reach the latent form of the virus. It is not a cure.

Jerome started out studying the basic interactions between herpes and its host. Then about five years ago, he noticed the work that Fred Hutch structural biologist Dr. Barry Stoddard was doing on gene-targeted proteins for genetic engineering and “realized we could shift from just studying these viruses to actually doing something about them.”

“When we first started this work and looked for funding, some [grant proposal] reviewers said, ‘Herpes is just a nuisance infection. Why would anybody want to be cured?’” Jerome said.

Jerome had worked with people in the herpes community enough to know that, in fact, interest in a cure was high and the infection was far more than a “nuisance.” In the September issue of the journal Sexually Transmitted Diseases, he and other Fred Hutch and UW researchers published the first paper to assess attitudes toward cure research. An online survey of more than 700 people with genital herpes found that up to 81 percent were interested in participating in clinical trials aimed at curing HSV — despite the availability of suppressive therapy.

Through private donations from the Caladan Foundation and internal sources, Jerome kept the research going. The results he’s been able to show have now led to funding by the National Institutes of Health.

“One of the really cool things over the years has been the shift in perceptions around cures of chronic viral infections generally, but particularly herpes infections,” Jerome said. “The scientific community is really coming around and accepting this as an important kind of research and as something that has a good chance of bearing fruit, hopefully soon.”

Mary Engel is a staff writer at Fred Hutch. Previously, she covered medicine and health policy for newspapers including the Los Angeles Times, where she wrote the editorials for a series that won a Public Service Pulitzer for health care reporting. She also was a fellow at the year-long MIT Knight Science Journalism program. Reach her at mengel@fredhutch.org or follow her on Twitter, @Engel140.